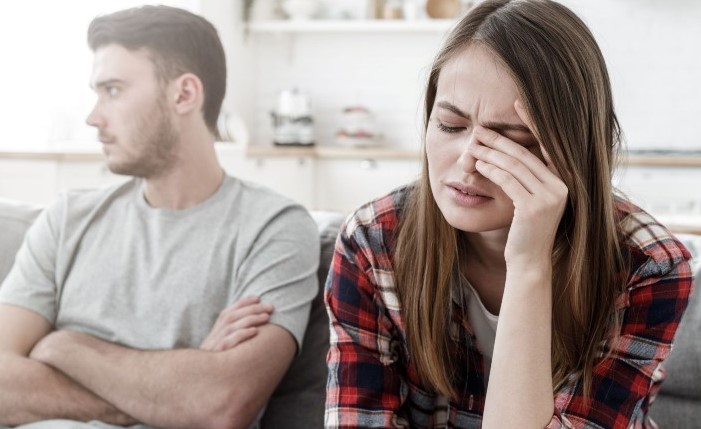 If you are asking yourself “why does my boyfriend hate me” then your relationship is probably not heading in the right direction. Hopefully this article will help you identify why you might be feeling this way, and maybe you can stop these feelings of not being wanted.

Whatever the reason is for these feelings just remember your happiness is most important and if you are not in a happy relationship, you should consider leaving and focussing on your own path to happiness.

If your guy is being a jerk and hating on everything that you do then there are certain key things to look for in order to determine what could be going on with him.

#1. Why Does My Boyfriend Hate Me? Maybe He Just Hates Your Family

If your boyfriend hates your family is there a possibility that he could somehow be taking this out on you? Either by making you his scapegoat or just putting all of the blame on you instead. In order to deal with this you should consider talking to your boyfriend about how it makes you feel. When he is constantly taking shots at you ask what he thinks about the people that love you most. If you boyfriend cannot accept your family, maybe it’s time to find someone else.

#2. He Is Stressed about Friends or Family

Your boyfriend could be going through a tough time right now and someone else is making things even worse for him. Maybe a friend or family member of his is in a relationship that isn’t going too well right now and he sees you as a distraction.

It’s not being passed down to you intentionally, but by association it makes you take the fall for something that is out of your control. The best thing you can do in this situations is to try and find things that you have in common with him and try to do something fun together.

#3. Why does my boyfriend hate me? – He Is Being Jealous

If your boyfriend seems like he hates everything about you it could be because he is feeling a little bit jealous. Maybe he feels like your interested in somone else?

If your boyfriend hates you because of something like this then it can be a dangerous thing. There may be some advice out there that can help both of you let go of these feelings and become more comfortable in the relationship again. There are websites and books that can offer advice on how to make things work when jealousy is present.

Check out this great audio book to overcome this common issue of jealousy.

#4. Why Does my Boyfriend Hate Me? You Have Changed Since He Met You

If you have changed a lot since your boyfriend first met you it could be a reason why he doesn’t like you anymore. If he was attracted to the way you used to be and now you are moving in a different direction this could cause his feelings to change. This does not mean you have to change back! It might mean you two are heading in different directions and it is time to break up.

If you feel like your boyfriend hates you because of something like this, then it’s time to communicate with him and ask what has changed.

Just be strong and remember, there is nothing wrong with who you are and how you look, and you shouldn’t be unhappy just to make someone else happy.

#5. He Is Just Plain Confused

If you are wondering why your boyfriend hates you then chances are he is just confused by the relationship as well. Maybe your boyfriend is frustrated because of how things have been progressing and it’s making him feel like this will never work out or that he doesn’t even want to try anymore.

If your guy is feeling this way then the best thing you can do is to try and find out what exactly is bothering him so much. If he feels like things are slowing down between the two of you than it might be time for both of you to sit down, have a heart-to-heart talk, and see where each of your heads are at on this.

If your boyfriend hates you, it could be because he is lazy and just wants to do nothing. The fact you are so active, and always doing things may be what’s causing him to despise you.

The more you clean up after him, and the more you do to make things progress in your life the more he feels like a slouch and he blames you for it.

This is a difficult suituation to deal with. If you directly tell him he’s lazy it would likely cause a fight. The best way to motivate your lazy boyfriend is to drop hints here and there that he should get up and do something.

#7. You Are Just Too Different To Get Along With

Maybe your man hates you because there is just too much that separates the two of you.

Maybe you two have completely different lifestyles. It might be that your personalities just don’t mesh well and there is nothing that can be done about it.

If you are wondering why your boyfriend hates you the best thing you can do for yourself is to accept things as they are and move on to more relationship-compatible people. It might just be that you and your partner weren’t meant to be together forever.

#8. He Is Too Scared To Get Involved Right Now

Some boyfriends get spooked when they are feeling like a relationship is getting too involved.

Maybe he doesn’t want anything serious right now or maybe he is feeling so stressed out about his life that the last thing he wants to do is get more serious into a relationship.

Maybe you want kids and a family and all that stuff, but he doesn’t? If both of you want different things then it might be time for the two of you to go your separate ways for now.

#9. Why does my boyfriend hate me? He Is Allergic To Commitment

Maybe your boyfriend is just conflicted about how he feels for you right now, or maybe he knows that there are other fish in the sea.

It’s time for you to reassess your current situation and realize whether it’s worth holding onto someone who can’t commit right now, or move on to find someone who can love you properly.

#10. He Has Just Fallen Out Of Love With You

If your man is wanting to break up with you because he has fallen out of love with you then maybe he is scared to do it. This could be why you feel like he hates you. Maybe the two of you have drifted apart over the years or maybe you guys are just growing apart.

If your boyfriend has fallen out of love with you then it’s time for him to move on, but if this is really what you want then there might be a way to get him back into love with you again.

#11. He Has Plans for the Next Stage in His Life

Maybe your boyfriend is finding it hard to be in a relationship with you because he wants to move onto the next stage of his life. You might have a problem on your hands if you are not part of those plans. Maybe he plans to move to a new state or province? Maybe he has plans for university or college?

This doesn’t mean your boyfriend hates you, it just means he is still growing. He might be trying to find a way out of the relationship or it could also mean that he has someone else in mind for when things are over between the two of you. It’s hard to tell exactly what is going on inside your boyfriend’s head right now, but it’s time for you to find out. Maybe plan a nice romantic date and have a serious conversation.

#12. He Is Just Plain Old Unhappy With You

Maybe your boyfriend is ready to break up with you because he has just become unhappy with the way that things are going in your relationship. Maybe the two of you have just started fighting more than usual or you don’t really like the way that your boyfriend treats you anymore.

This could be because there are some serious problems in your relationship or maybe just simple things that you need to work on. Either way, it’s time for things to change if you want your relationship to last. You two need to communicate more, and do more fun things together.

#13. Why Does My Boyfriend Hate Me? He Wants To Be Single For A While

If your boyfriend is wanting to break up with you because he wants some time to be single again then you might have another problem on your hands. Your boyfriend might just be feeling like he wants to have some time for himself without being responsible for anyone else or he might be wanting to go out and play the field a bit.

It’s hard to tell what is going on inside your boyfriend’s head right now, but it could be because he simply wants to take some time off from dating. Maybe your boyfriend just needs to get his head together and realize what he wants in his life. It’s time for you to figure out if this is really what you want for your relationship or whether it’s about someone else.

#14. He Is Gaining Interest In Someone Else

If it seems like you boyfriend hates you maybe it is because there is someone else in the picture. Check out our free guide 25 Signs of Cheating.

This does not mean that your boyfriend is definitely cheating on you, but it could be something serious.

If your man is gaining interest in someone else then that could be a serious problem. Maybe your man is talking to another woman and he might even be flirting with her too!

It’s time for you to figure out why your boyfriend might be gaining interest in someone else and see if there is a way to make things work again. It won’t always mean that the relationship is over if you find out what is going on!

Your man might not be wanting to break up with you but he might be having trouble with the relationship. Maybe your boyfriend feels like things between the two of you are getting a little boring and he wants to spice things up again.

Maybe your boyfriend feels like he has tried everything and nothing seems to work. It is time for you to put things back together again if this is really a problem that can be fixed. Plan a trip out of town together. A road trip is always fun and brings the two of you closer when you are exploring new places together.

Don’t settle for less than you deserve. Good luck!

Getting Over a Breakup? Here’s 12 Ways to Overcome from Breakups